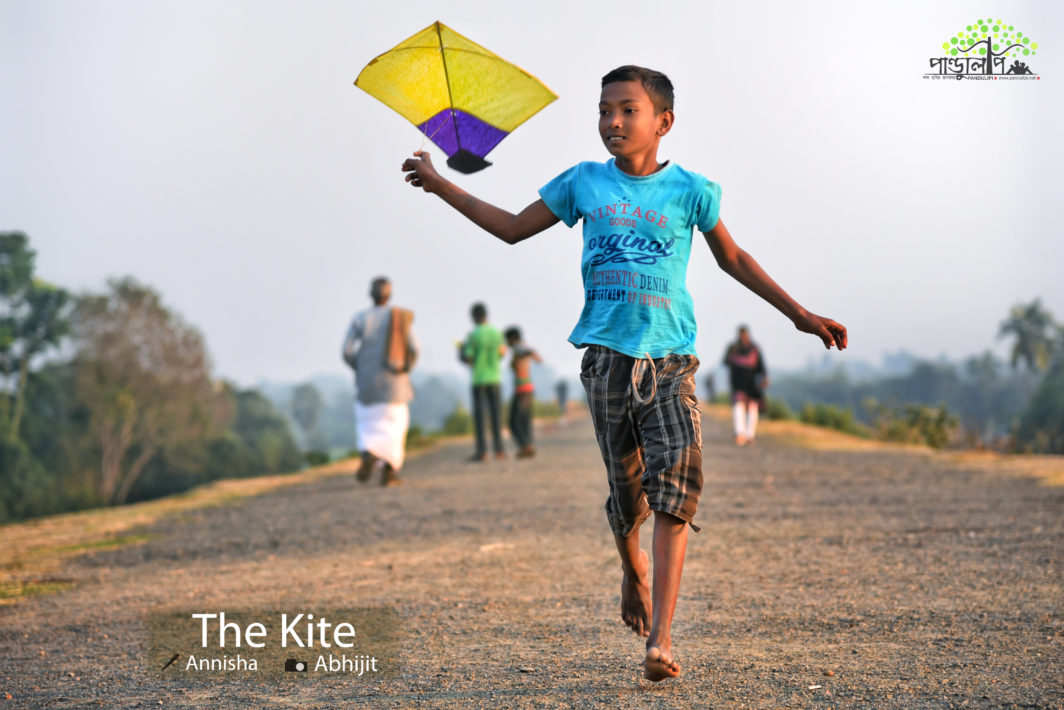 Aniruddh struggled on his terrace, with his reel and kite. It is the day of makar sankranti and he has heard from his non-bengali friends that on this day, they fly kites. Studying in the eighth standard and with exams knocking at the door, he has somehow secured an hour from his mother, for flying kite. His aunty has gifted him a colourful kite, the previous evening.

Aniruddh’s parents have taken a days leave from their respective offices. His ailing grandfather was unwell since last night. A doctor has already visited their home in the morning. The atmosphere at home was gloomy and silent. The open terrace and the blue sky seemed to provide him the required relief and oxygen. A mild wing awoke his sleeping mind and he started humming a tune…,

He had often heard his mother sing this song of Tagore, never being aware that it had penetrated deep within his soul.

After trying for about half an hour, his kite started flying higher and higher. He felt that the kite was his own self, trying to cross the visible atmosphere. He wished that he could sit on his kite and fly away to the unknown space. However his fantasy was broken by another notorious kite,which forcefully cut across his specially polished thread.Suddenly he lost control over his kite and it flew out of his sight few moments later. He felt a tremendous pain in his tender heart. Never had he felt such pain. He looked up and asked his dear God, “WHY?” His eyes became red with pain and anger. But God seemed to respond to his question. A song flashed in his mind,

The song calmed his mind. He now felt the freedom of his kite which had torn away from the threads of bondage. His pain subdued a little and he recalled that his one hour was over by now. He was surprised that his mother didnt call him yet.

He came downstairs and was shocked to see many of his relatives gathered around his dear grandpa. He stood by his mother, who whispered that his grandpa has gone to heaven. His face lit up and there was a broad smile on his face. His father gave him a stern and angry look. His smile vanished. But he kept smiling within, thinking hard how his grandpa’s “soul-kite” had managed to break-free from the “bodily-reel”. He was further sure that grandpa’s soul had flown to heaven, using his kite…

At a corner, his aunt sat, singing heavily and slowly,